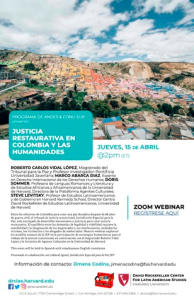 Among Colombia’s efforts to create lasting peace after 60 years of civil war, the transitional justice court, Jurisdicción especial para la Paz, is charged with developing mechanisms and practices to create restorative justice. The balance between demands for legality and for feasibility requires the sensitivity and the imagination of magistrates and their interlocutors, including victims, victimizers and lawyers on both sides. This webinar will explore the notable advances of the JEP in engaging humanistic strategies for the work of transitional justice, in conversation with Magistrate Roberto Vidal Lopez and the Cultural Agents Initiative at Harvard University. Presented in collaboration with Cultural Agents and Jurisdicción Especial para la Paz JEP.

This event is virtual and will be held in Spanish with simultaneous English translation.